Noah Wall who was born with severe spina bifida, hydrocephalus, only 2% functioning brain tissue and paralysed from the chest down, has stunned experts across the world with the physical and mental advances he has made over the last few years.

Noah was first introduced to the nation during a heart-wrenching episode of BBC DIYSOS, living in a crumbling Cumbrian house in conditions that were not fit for him or his family to endure any longer.

His inspirational parents Rob & Michelle, who had never given up on their son Noah, were deservedly nominated to have their lives transformed with a DIYSOS Big Build in 2013. As part of that BBC programme we donated a sensory floor (our omiVista system) so that Noah could enjoy interactive activities that would: 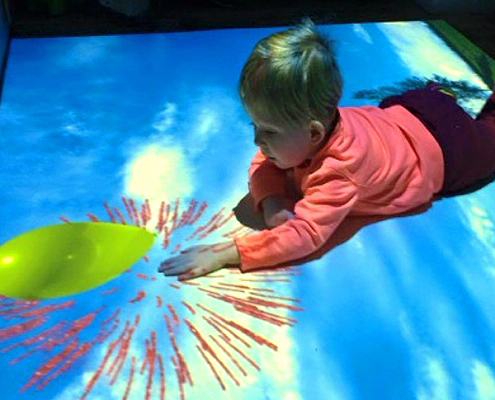 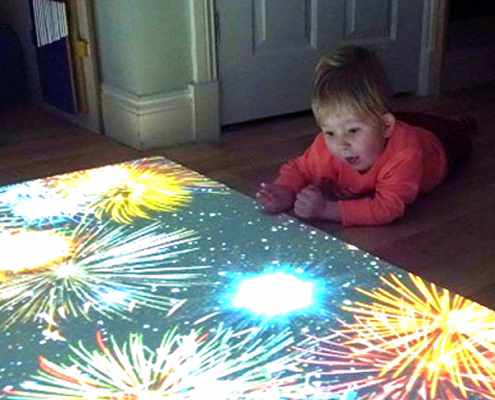 Five years on Noah is now a confident 7 year old who amazes all who meet him with his confident speech, determined spirit and positive attitude to life.
Astonishingly recent brain scans have shown that Noah has grown an almost fully functioning brain, amazing neurologists and medical experts across the world.
Noah still has a long journey ahead of him but we are obviously thrilled that our floor has helped to increase his agility and cognitive development as Shelly herself has said, ‘the daily stimulation of his omiVista interactive floor must’ve helped contribute towards Noah’s brain growth’.

Noah’s Mum continues: ”Noah’s sensory floor has made such a difference to our lives. It’s the first thing he wants to do in the morning and has motivated him to move and play so much. He loves the music and knows all of his colours, shapes and numbers.”

”He can flip himself out of his ZipZac chair and whizz around the floor splatting objects and dancing. Whenever he has visitors it is the first thing he wants to show them. He’s very proud of his sensory room…”

The combination of music, movement and interactive projections has clearly been a powerful stimulus for him. Recently we returned to his home in Cumbria to catch up with Noah & his wonderful family. It is always inspiring to spend time in his company and see our sensory technology used so effectively.

Visit www.hugsforNoah.co.uk to follow Noah’s story and support him.